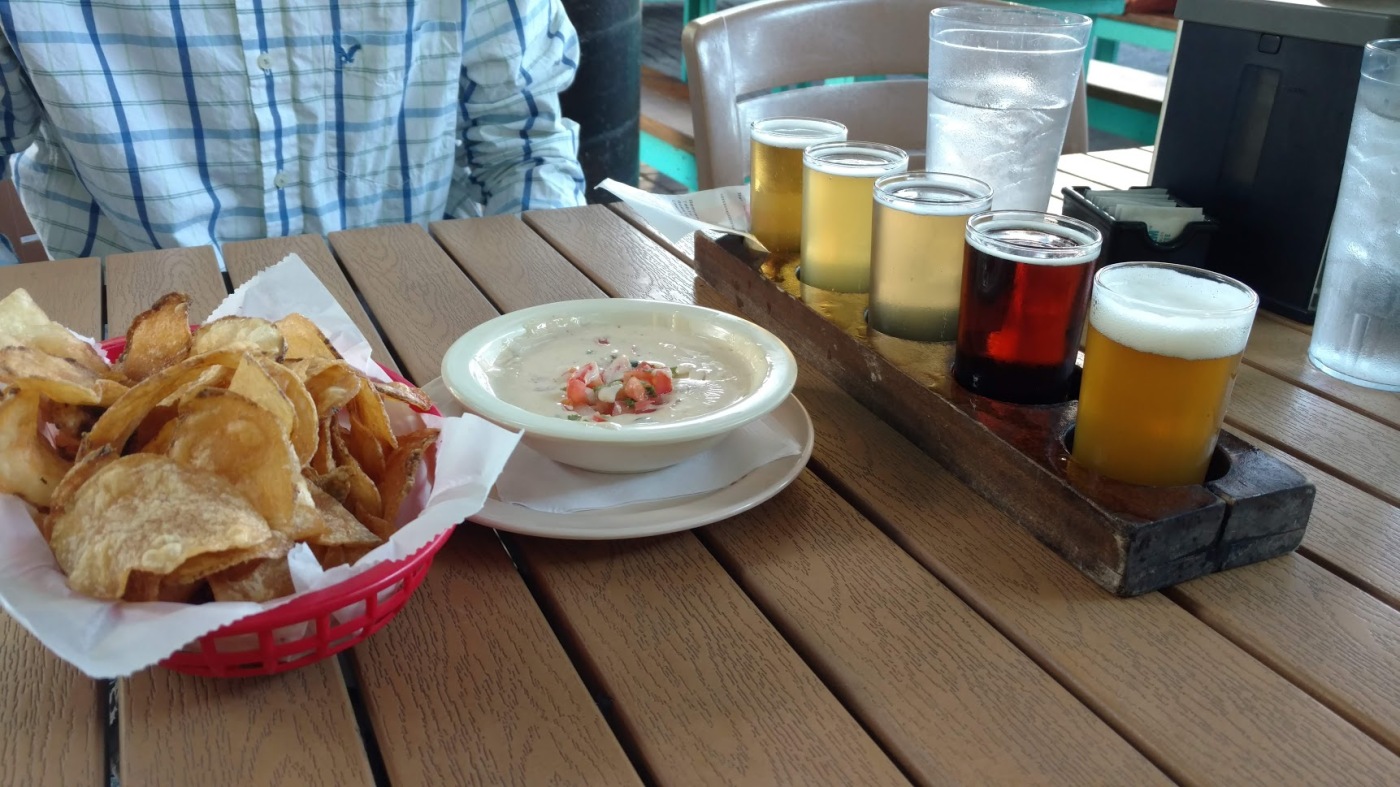 My hands have learned to understand the sandstone cliffs of Horseshoe Canyon Ranch (HCR).  My husband and I have taken a few trips there over the years to learn and improve our outdoor rock climbing skills.  This hobby has turned into a full blow passion, and we began to crave more.

We heard about the limestone cliffs outside of Austin, TX and I began to wonder how my hands would find their way around this new type of surface.  What challenges could these new cliffs provide for me?

First, we researched the area.  We knew Austin was a dog friendly city and wanted to bring our dogs along on this rock climbing centered trip.  We decided on Reimer’s Ranch for our rock climbing adventure because we would be able to bring them into the park.

Reimer’s is located 30 miles southwest of Austin, and we stayed in a pet-friendly hotel on the south side of Austin, which we made sure was situated close to Austin craft breweries (the second focus of our trip!).

Reimer’s Ranch mostly showcases short, technical routes ranging from 5.4 to 5.14 – making this an ideal location for beginners and experienced climbers.  The cliffs mostly overlook the Pedernales river and the sections we climbed were mostly shaded and not in direct sunlight.

We planned our trip for Labor Day weekend, and we drove to Austin after I got off work on Friday.  We had already communicated with the hotel to let them know of our (very) late arrival.  We checked-in to the hotel around mid-night.  The hotel was an Extended Stay America hotel, so we had a fridge and stove top to cook meals.  We found that we were able to save a little bit of money by preparing our own food, and that gave us extra money in our budget to spend on trying Austin craft beer!

We were tired and slept in a little of Saturday morning before driving to Reimer’s to rock climb.  This was a new area to my husband and I both.  Driving to the park we wound through dessert, which is an interesting contrast from the forested canyon that we usually climb at in Arkansas.

We spent the morning hiking around the area, looking for the cliffs and trying to determine which routes we were at.  I had saved a map of the climbing cliffs on my phone and we used that to determine our location.  We started on a section called The Dude Wall.

We settled on some short routes that were low ranked to get a feel for the rock.  These were tucked away from the most traveled path.  It was nice because we also were alone for most of the morning here.

The stone of the cliff has such rough texture, and my hands were softer than usual because we were not getting into the rock climbing gym very often.  Even though the texture was course, the rock itself didn’t feel dense – not like the hard, smooth sandstone of HCR.

The sun was fairly high in the sky, and we were pretty warm but the rock still felt cool.  Casey ascended the first route on the wall to setup the top rope for me.  The brush and plants growing in the cliff caused some added challenge. 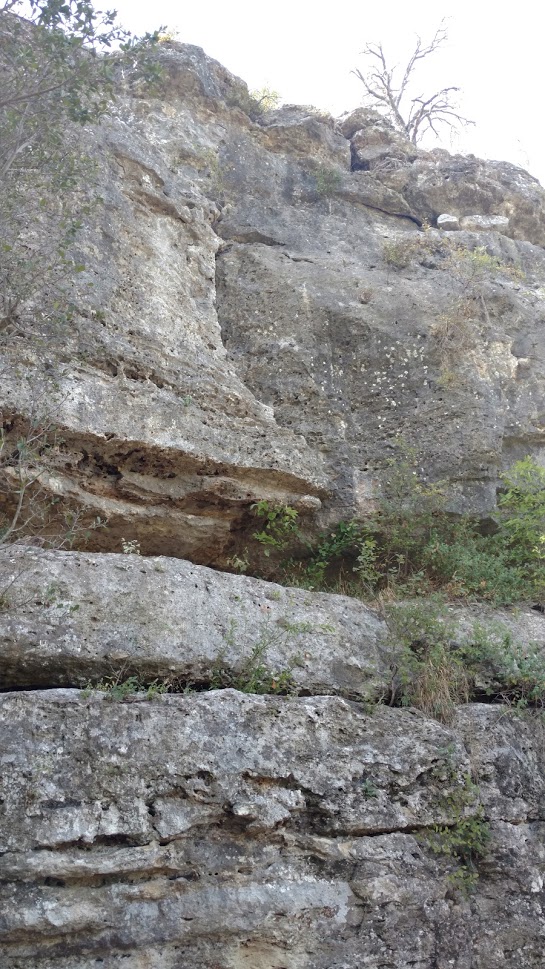 This section of cliff has a huge mantle cutting through it near the start.  In fact, most of the cliff has such huge cracks and layers, it was very interesting.  Casey and I had a lot of fun climbing these routes, and they provided some good mental puzzles for us to solve.

There eventually came a very large group of people and we decided to move on the a different section of the cliff.  We also wanted to scout out some routes that we wanted to climb on Sunday morning. 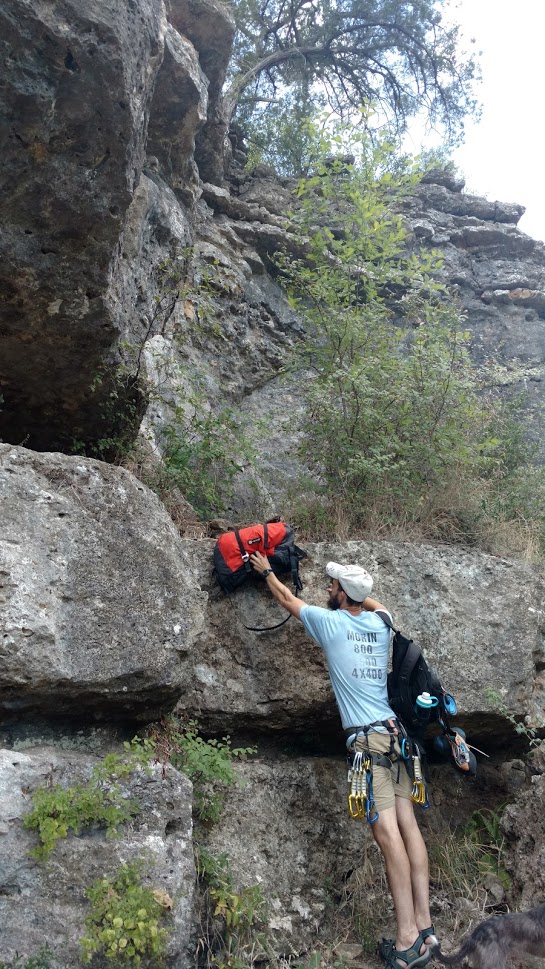 We made our way to a section of cliffs between Dreamers Wall and the Huking Buttress Wall.  I am not sure which routes we actually climbed, but we picked a section where we had to throw our bags up on a mantle to get to the start of the routes.

We munched on some granola bars as it was getting close to noon and climbed just a couple of times in this small corner.  These routes were very short, but a couple moved sideways on the cliff wall which made for an interesting challenge.

We noticed on the map that a little farther down were some routes we wanted to try, but were hot and tired and not feeling up for the challenge at the moment.  We made the decision to head back to the hotel and get ready for the second round of activities we had planned.

One of our favorite place in Austin, TX is the Yard Bar.  Casey and I love taking our two dogs there to run, play and socialize while we get to enjoy a couple beers.  It was early afternoon and we spent a couple hours making new furry friends before thinking we needed to do something for dinner.

Part of this vacation to Austin was to sample as many different types of local craft beer as we could.  Our spot for dinner Saturday night was Uncle Billy’s Brewery & Smokehouse.

Casey and I split a flight of beers and ordered chips and queso as an appetizer.  The chips are homemade and delicious!  I highly recommend them!

Another deciding factor for Uncle Billy’s was their veggie burgers.  Of course Austin has plenty of vegetarian places to eat, but we had heard great things about the beer here and were excited to also enjoy delicious vegetarian food to pair it with!

Casey and I have different tastes when it comes to beer, but we both love trying new things and getting out of our comfort zone.  The beer here was good, we tried: Sour – Gose, American IPA, Hefeweizen, American Amber/Red, and a Pilsner.  (You can see all our beer tastings and rantings on Untappd).

The dogs were completely wore out and we knew we wanted to get up early to enjoy some morning climbing, so we headed back to the hotel after we finished dinner.

We weren’t up as early as we would have liked the next morning, but we exercised and did some yoga before making the drive out to Reimer’s Ranch.

Casey and I are Tolkien fans, so naturally we wanted to start our day climbing the routes of the Middle Earth Wall.  There’s a beautiful sign on the trail to mark where you will find the Middle Earth routes. 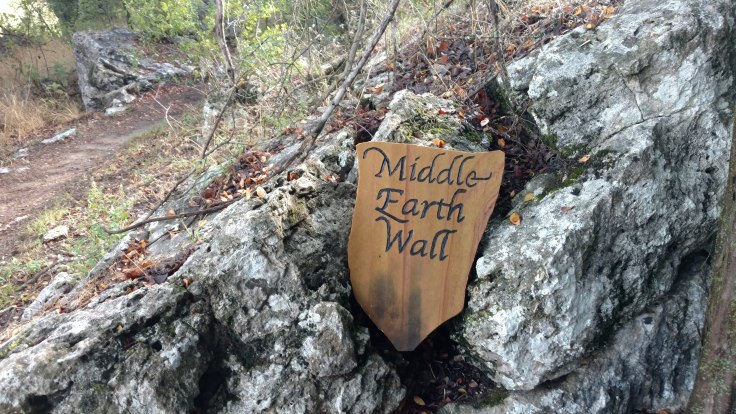 The first route we noticed was the Middle Earth Cave, a trad route ranked as 5.6.  This route is in the chimney-tube formation, where you can see a petrified tree inside the cave.  In order for us to be able to climb the Middle Earth Cave route, we first had to setup the top rope by climbing My Precious, a 5.8 route to the left of it (you can see the setup in the image below).

WOW! These routes were fun to climb!! The mantels at the beginning are such an interesting challenge, as we had not encountered them in our rock climbing adventures before.

There is a huge mantle that cuts straight through the cliff, and has plenty of room for someone to stand on.  The texture and grip of the stone is something to get used, but not unmanageable.  The view at the top of the cliff gives you an overlook of the river and down the cliff a bit.

Climbing in the cave was so exciting and fun!  There were many chicken holds and good foot placement.  It was no surprise that this area was really busy.  We had people lined up behind us to climb the routes.

There were a few other routes that looked interesting to Casey and I, but there were too many people arriving and with the dogs we didn’t want to be a nuisance – so we moved on to a section of the cliff that wasn’t as busy.

We had some difficulty reading the map and figuring out which sections of the cliff we had moved onto.  It was a little confusing, but didn’t stop us from having fun.  We moved around a bit, trying out routes as we found empty spaces.

The last route we climbed was an accidental find, and I was ecstatic about it!  The route followed a crack up the entire height of the cliff. 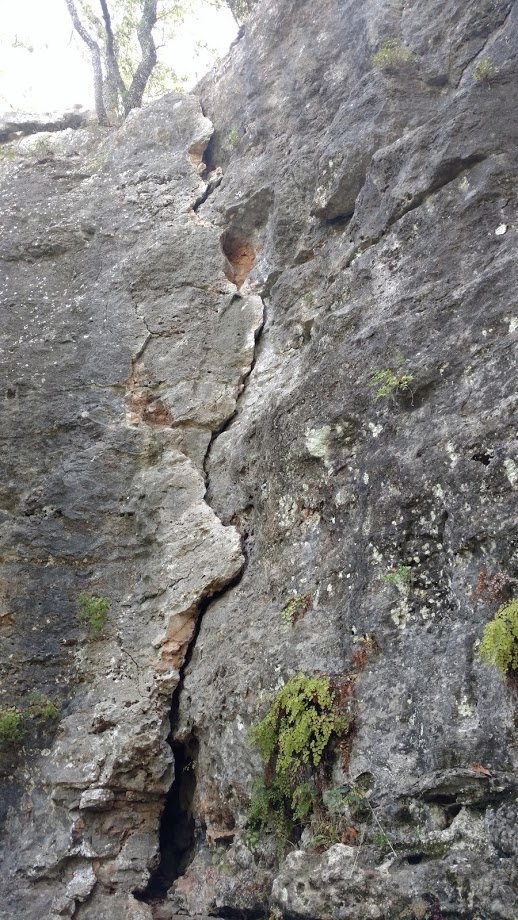 This crack was fun to use to climb.  Casey and I both agreed that this was one of our favorites!  It’s tucked away from the main hiking trail and well shaded.

After ascending this route we were done climbing for the day.  We went back to the hotel and cooked up a light, late lunch.  Our plans for the evening were to try a local Ethiopian restaurant, then go to some craft breweries.

We wanted to make sure the dogs got enough exercise, so we made our first stop the Yard Bar.  Afterwards we went to Austin Beerworks with the pups.  We sat in the outdoor patio area and shared a flight of beers. We had been listening to beer related podcasts and could tell that we were getting better at picking out the notes in each beer.

The beer here was probably a top contender for our favorite and we wish we could have taken some with us.  Only, Austin Beerworks wasn’t selling growlers or to-go containers.

After finishing our beer flights, we took the dogs back to the hotel and grabbed a Lyft to Taste of Ethiopia for dinner.  Moving from Oregon to Louisiana, we lost a lot of the diversity and multi-cultural food options – so we were excited to try Ethiopian food!

We ordered vegetarian samosa to share.  The main course was a variety of different Ethiopian dishes.  You eat the food with your hands and use a sponge like bread to pick up the food.  It was a very interesting and delicious experience!

After dinner we had time to check out one more craft brewery: St Elmo Brewing Company.  When we arrived we chatted with guy behind the bar about the different styles that were on tap.  We samples a couple before pick out our flights.

I remember ordering a coffee IPA (although I don’t recall which one pictured above it was).  The coffee IPA was interesting, as it had the same yellow color I have seen with IPA’s, but tasted like coffee grounds.  Interesting to try, but not my favorite.  The “Buble” was really cool, tasting a little like champagne.

St Elmo Brewing Company has a few regular beers that they brew, but also likes to keep trying new things.  I was really into the Angus Stout, and we bought a crowler of that and a couple other styles to take back home with us.

After finishing our flights we grabbed a Lyft and went back to our hotel.  We would be traveling home tomorrow morning.  We did make time the next morning to take the dogs back to the Yard Bar.  We wanted to make sure they had time to run and get some energy out before the long drive back to Louisiana.

Our trip to Austin was awesome! We really love this place and it’s worth the seven hour drive to get to experience the cool places and craft beer that Austin has to offer!

Have you done any rock climbing at Reimer’s Ranch? Or maybe you enjoy Austin’s craft beer scene.  Leave your thoughts in the comments below.  If you enjoyed this post please like, subscribe, and share!

My husband & I live a very full life! I am lucky to be constantly exploring and learning with my best friend. When I do get down time, I work on writing about our adventures here, on my blog.