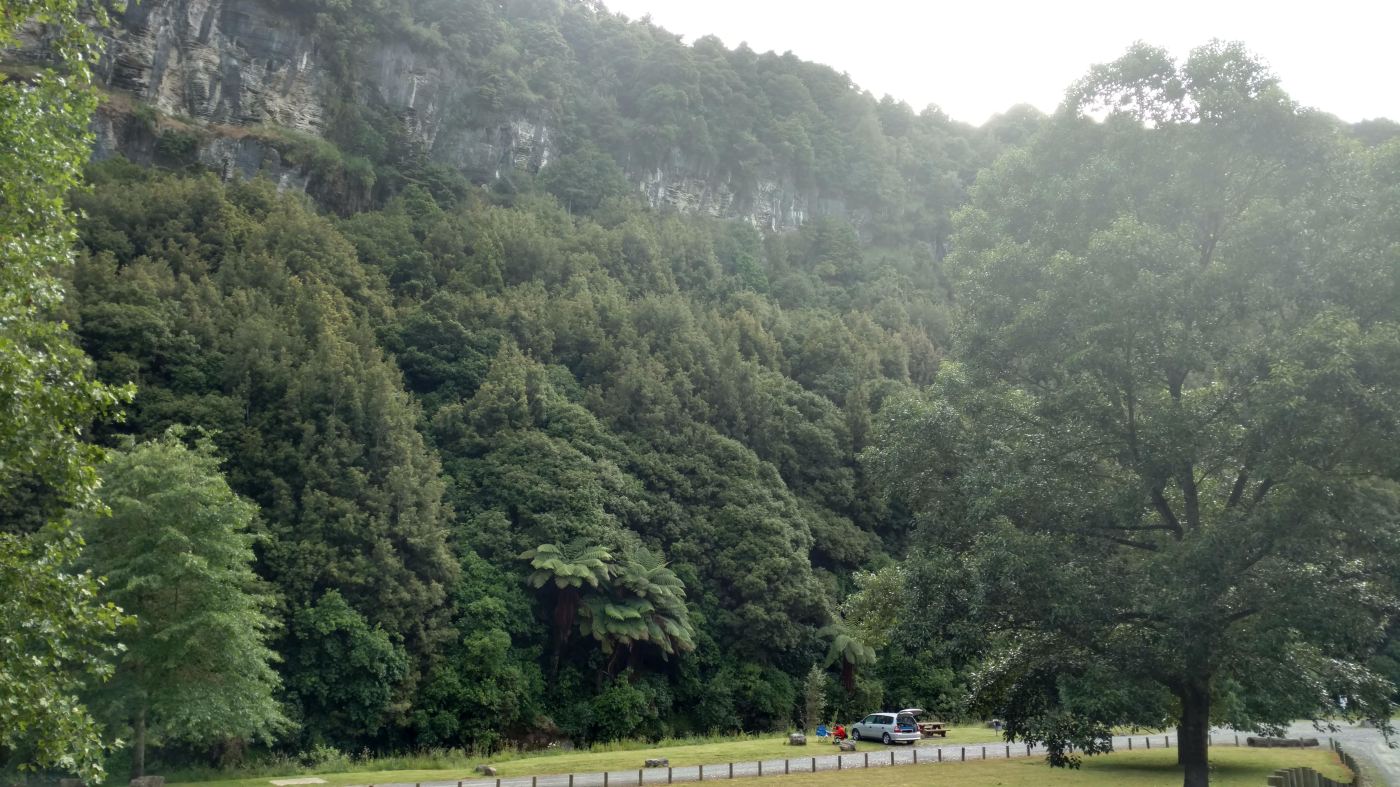 Casey and I had just begun our adventure of traveling New Zealand in our Campervan.  We had spent almost a week managing our jet-lag in Auckland before hitting the road and heading to some “touristy” destinations on the top of our list.

We had found a free camping site to stay at for our first night: Mangaokewa Scenic Reserve.  The Reserve has a nice picnic area, a lovely bush walk to Cascade Waterfalls, and to our surprise rock climbing!

The morning after our first night we enjoyed a coffee at a small cafe and were looking at the the tourist attractions nearby.  Our plan was to go to Waitomo to see the glowworms then head to Hobbiton the next day.  During our tour of Waitomo, one tour guide was asking us about our travels so far, and seeing my husbands ‘Climb On’ shirt she inquired if we knew of the local rock climbing.  She first mentioned Mangaokewa, and it struck us that we had been camping there the night before with no idea that we had been that close to rock climbing routes.

After our cave tour, a hot shower and free meal, we went back to the Reserve to camp and hopefully find the climbing routes the next morning.

We followed the directions given to us by the tour guide, first going over the suspension bridge then climbing the steep and slightly muddy hills to the limestone cliffs.  There were a few groups already there and climbing.

We watched part of the group climbing the large cliff where dead stalactite are found throughout the overhang.  A friendly kiwi made some light conversation with us before we decided to begin our climbing.

We noticed that all the routes were labeled and rated, but unfortunately New Zealand grades their routes differently than in the US.  So, we had to carefully examine the routes and decide whether it fit our abilities to lead climb.  The tour guide, who was also from the US, gave us what she thought would be our range in the NZ scale (16 – 20), and we worked from there.

We picked a short route that seemed to have some challenge to it: Grade 17 “Puffin Stuff” – 3 bolts. The route started between two trees.  We setup our gear, checking for safety before Casey began lead climbing the route.  I watched as he ascended the cliff, taking note of the holds and foot placements.  The route was within his range, but looked different than the routes we were used to.  I decided that I was going to lead climb the route as well, so Casey cleaned everything but the anchor once he had finished his ascent.  As I climbed the route, there was a bulge near the top of the route that gave me some mental troubles, but I was able to push through.

Once I was finished, I set myself up so I could clean the anchor.  I am used to routes that have permanent anchor points setup at the top, but at Mangaokewa we had to setup and clean all the anchor points for the routes we climbed.  It’s not a hard task, but it takes focus to ensure it is done safely (and in a way that you do not drop your rope back to the bottom of the cliff).

We picked a second route to try just to the right of the first one: Grade 18 “Matza Pooh Head” – 3 bolts.  This one had a higher ranking, and looked to be even more of a challenge.  I belayed my husband and I watched him ascend the route.  The route wasn’t too much higher than the last, but it did not have as many holds as the first.  They seemed more spaced out.  I asked Casey to leave the rope in so I could just top rope this route.  I knew it was going to be more challenging for me than the last.  I tried many different ways, but could not overcome the long reach around, and felt lost with my feet placement.  Casey had to climb the route a second time and clean it.  I felt disappointed, and frustrated with myself.

Luckily, a kiwi that was climbing with the large group nearby came over and interrupted our climbing.  He had brought a climbing book over and was showing us some of the other places in the area to climb.  We made notes and thanked him for the information.

I decided to eat a granola bar and try to let go of my disappointment.  We decided to move to a different section of the cliff for more climbing.

We picked two routes close together that we wanted to try, that were at or lower grades than the first two: Grade 16 “Abi’s Arete” – 5 bolts & Grade 17 “Neglected Momos” – 4 bolts.  Casey led them, and I tope roped them (and cleaned them afterwards).  The second route that I cleaned made me extremely nervous.  I can usually find a secure place to set my feet as I clean, which gives me a feeling of stability.  However, this tricky route had no mantle for me to stand on, just crimps.  I was so nervous and uncomfortable cleaning this route – but remained calm so I would perform everything safely.  I was so relieved when I was finally able to come back down!

After the last route, Casey and I were feeling pretty tired and our fingers were rubbed raw from the limestone.  It wasn’t too late in the day, and we figured since we were already on this side of the river we might as well take the little hike to the waterfall. 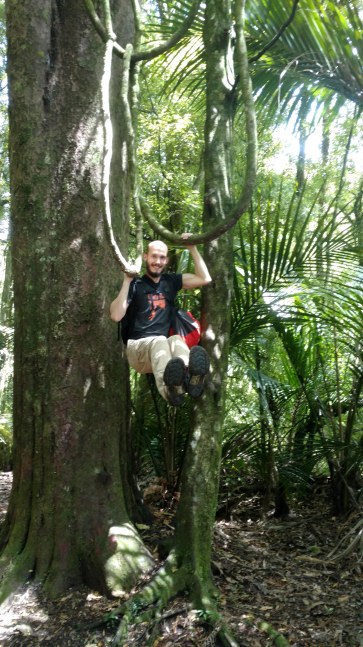 This somehow turned into a very long hike going all the way around the trail and making it back to the campsite on the other side of the river.  I was quite grumpy by the end and ready for dinner, but it was a beautiful hike (NZ is full of amazing, natural wonders).  It was getting later in the evening by the time we got back, so we settled on going into town to grab a couple beers and dinner.

I think it would be fun to go back to Mangaokewa after some practice at a New Zealand indoor rock climbing gym.  The grading scales and climbing style is something I want to learn more about.  I think I became content with the style of climbing I was accustomed to from our favorite spot (HCR) in the US.  It was a great experience to get to rock climb while traveling here in New Zealand, and I look forward to the many more places we get to climb!

For a more detailed guide of the rock climbing at Mangaokewa, click here.

My husband & I live a very full life! I am lucky to be constantly exploring and learning with my best friend. When I do get down time, I work on writing about our adventures here, on my blog.